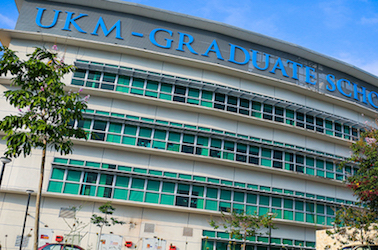 The Universiti Kebangsaan Malaysia was founded in 1970 out of an aspiration to uphold the Malay Language as a language of knowledge. The campus total land area is about 1100 hectres. In 2006, it was appointed as one of four research universities in Malaysia due to its background in quality research as well as receiving the Prime Minister’s Quality Award.

UKM attracts more than 19,000 students of with 12% of these being international students and is in possession of one of the largest university libraries in Malaysia. Students have access to a collection of over 2 million books, journals and online content. As being one of the 5 appointed research university, UKM has 7 living labs located in and around Peninsula Malaysia such as in Langkawi Geopark, Fraser’s Hill, Tasik Cini , Mersing, Lata Jarum, Sungai Pulai and UKM Bangi Permant Forest Reserve.

The Universiti Kebangsaan Malaysia invites APAIE 2019 delegates to a campus tour of the university’s facilities which include:

Faculty of Science and Technology
Historically, Faculty of Science began with the establishment of Universiti Kebangsaan Malaysia in 1970, with 5 departments, 16 academicians and 37 students. Faculty of Natural Resource Sciences was formed in Sabah in 1975.

When the University was incorporated in 1998, agreement had been reached for the Faculty of science and technology (FST) to be established on 19th July 1999 with four faculties combined, namely Faculty of Physical and Applied Science, Faculty of Life sciences, Faculty of Mathematical sciences, and Faculty of Natural Resource Sciences.

With this merger, FST becomes a stronger and ready to tackle learning and research of science and technology to bring Malaysia into the new millennium and later became a model for restructuring of other faculties in UKM

Faculty of Social Sciences and Humanities
The faculty has over 300 academics members consisting of a wide range of research experts in various fields of social sciences and humanities studies. The combination of experts and vast experiences of the academic members allow the faculty to offer students a broad spectrum of undergraduate and postgraduate studies, through taught programme, coursework programmes and research supervision.

After 8 years in operation with four departments, the year 2002 marks the formation of the Department of Architecture which was the fifth department that offered architectural based programmes. To complete the full structure, the Unit of Basic Enginneering Studies was formed in 2005 to specifically handle common mathematic courses as well as generic related courses such as communications and critical thinking.

Program proposed are subject to changes.